International Women’s Day 2020: 49% startups and SMEs want the 6 months of paid maternity leave threshold to be lowered; many propose 3 months as a viable option

March 6, 2020, New Delhi: The world celebrates International Women’s Day on 8th March every year, to celebrate the achievements on women across the globe. When gender parity and women’s rights has become one of the most pressing area in the current global scenario, a slightly different picture is being painted in India. The amendments made to the Maternity Benefits Act in March 2017, which had increased the maternity leaves for women in India from the earlier 12 weeks to 26 weeks, have met with both support and criticism. While women are happy that they would get more time to take care of their newly born baby, early stage startups and small businesses are feeling the heat and pressure of this amendment, owing to the extra financial burden on them.

LocalCircles conducted a survey among startups and SMEs to assess the impact of this amendment in the last 12 months. The survey received more than 8,500 votes from startups, SMEs and entrepreneurs from across that country. The results points towards an increasing trend of startups and small businesses not hiring women employees due to the financial strain that the Maternity Benefits Act 2017 puts on them. 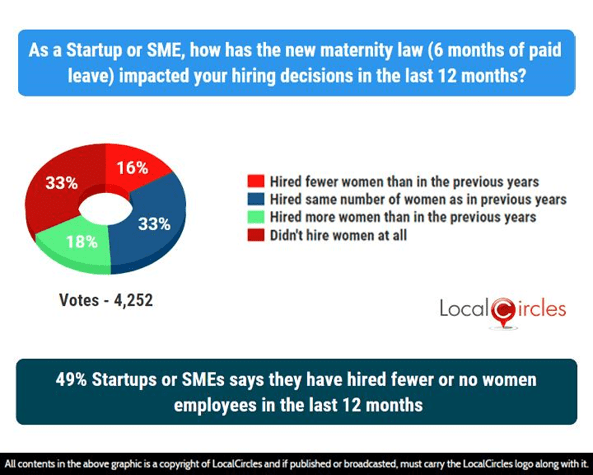 44% said that the current law of 6 month paid leave should be kept unchanged. This means the that 49% of startups and SMEs want the 6 months of paid maternity leave threshold to be lowered. 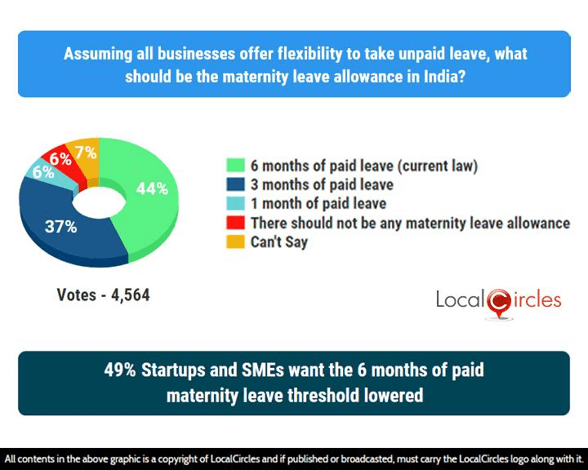 The Ministry of Labour & Employment, in late 2018 had said that it is considering a proposal of creating a corpus of around 400 crores to reimburse employers for 7 weeks of the extended maternity benefit. Majority businesses said that there is no clarity on this rule yet.

International women’s day is focused on helping women gain full and equal participation in global development and the workforce. The collective demand of Startups and SMEs operating in India is that the companies having an annual turnover of less than 10 crores should be exempted from the 6-month maternity benefit rule and the earlier 3-month rule should apply to them. If this is done, the startup and SME industry will be better motivated to give equal opportunities to women and would look to hire them without any prejudice or bias. According to startups and SMEs, the risk of inaction is that more and more of these companies will start looking like men’s club which isn’t an outcome anyone wants.

LocalCircles will be making a submission of this report to the Ministry of Labour & Employment and asking them to take swift action on it.