Mood of the Consumer 2020: 45% households say they plan to reduce discretionary spending in the next 4 months; 41% faced with distress situation of rising expenses and flat/declining earnings

March 2, 2020, New Delhi: As if India’s tryst with a slower economic growth wasn’t enough for the struggling consumer, the worldwide Coronavirus outbreak is already starting to hit travel, hospitality and trade and seems set to impact consumer earnings and spending in the next few months. LocalCircles conducted its bi-annual mood of the consumer survey to gauge the consumer confidence for the next 4 months, i.e. March – June 2020. The 6-poll survey received more than 43,000 responses from consumers spread across 218 districts of the country.

The first question asked consumers in the coming 4 months (March – June), in what category do they plan to make a purchase of above Rs. 25,000. As expected, 49% households said they do not plan to make any major purchase in this period. 16% said they would spend money to travel, 7% said they would upgrade their home or property, 6% said they would buy an automobile, 3% said white goods (AC, Refrigerator, etc.), 3% gadgets (mobile, laptop, etc.), 13% said multiple categories from these and 3% said others. 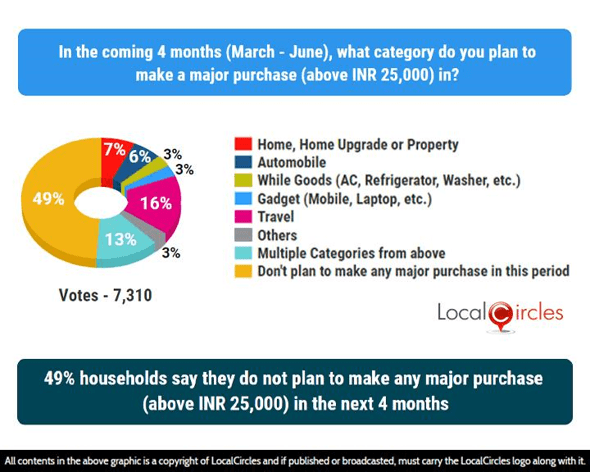 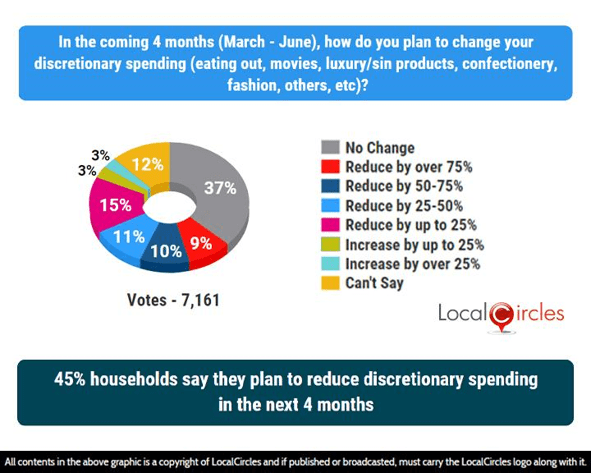 As consumers cut back on their spending, companies have also reduced their production. Many industries like the automobile industry have been badly hit due to the low consumer demand. This has forced many companies to cut on production, lower employee count and reduce expenditure. Some companies have also announced mandatory unpaid holidays for their staff to counter this problem and minimise expenses. This has had a direct impact on the earnings and expenditures.

People were also asked what has been their household’s position with respect to earnings and expenses. 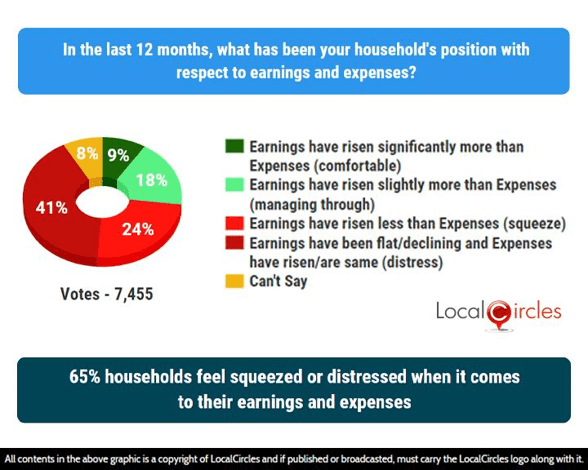 57% households say their savings have reduced in the last 12 months; 18% say they haven’t increased 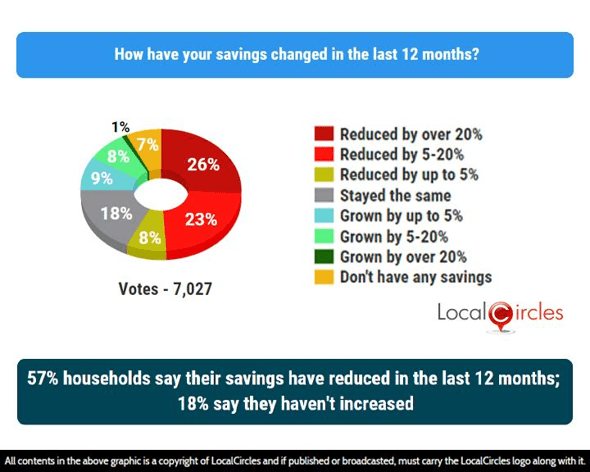 With salary hikes not keeping up, consumers are getting reluctant to save as inflation and household expenses keep rising. This reduction in investment pool might have long term repercussions for the country as the Government might need borrow from external sources at a higher interest rate.

When asked in what asset class were they currently keeping majority of their savings, 7% households said savings account, 38% said fixed deposits, 33% equities and mutual funds, 1% gold and 10% real estate. 9% said they don’t have any savings. This clearly shows that 45% consumers are investing in areas which are historically considered ‘safe bets’ like fixed deposits and savings accounts. 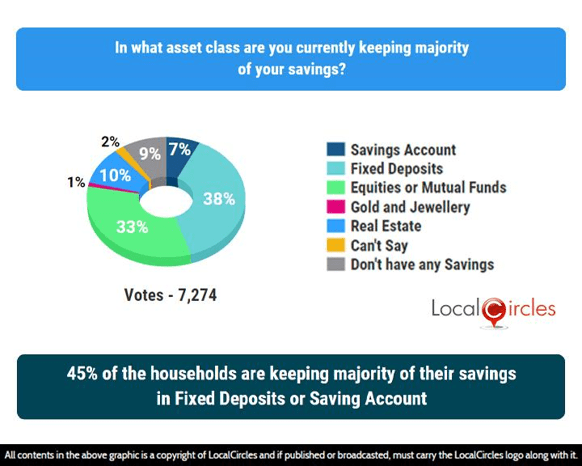 The economic slowdown has started showing its effect in the salary hikes of the Indian companies. Various reports have been suggesting that 2020 might be the worst year in the last decade for India, as far as the salary increments are concerned. Consumers also have a weak outlook towards the increase in their income levels over the next 12 months and the poll confirms that. The question asked consumers in the coming 12 months, how do they believe their earnings will change as compared to the last 12 months. 3% households said it will increase by over 15%, 26% said it will increase by up to 15%, 30% said it will stay the same, 18% said it will decrease by up to 15% and 10% said it will decrease by over 15%. 13% were unsure. 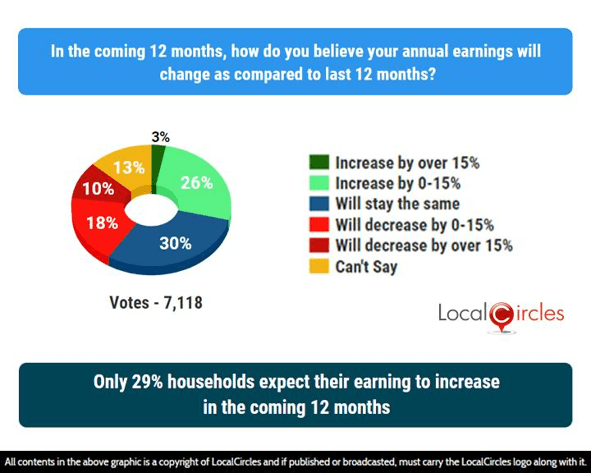 The comparison with last year shows a worrisome picture. The percentage of households expecting an increase in earnings in the next 12 months which stood at 44% in 2019, has dropped to 29% in 2020 pointing towards rising pessimism.

Pessimism Rising: Percentage of households expecting increase in earnings in the next 12 months drops from 44% to 29% 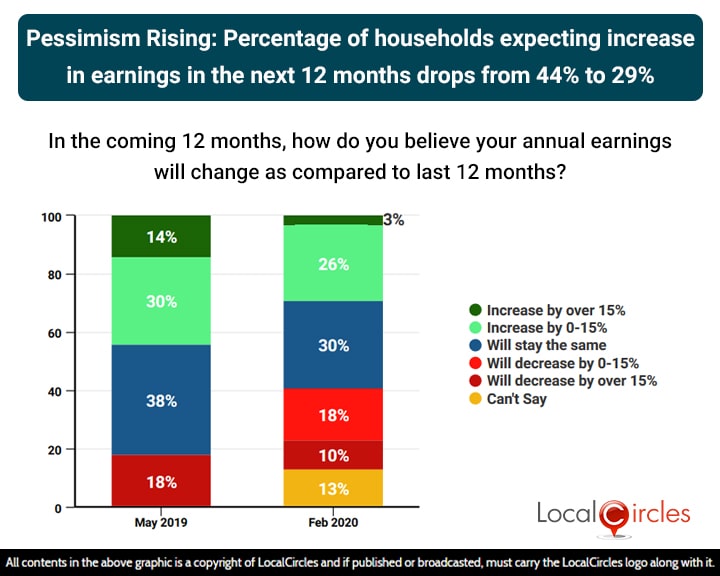 Latest data is now suggesting that there is a 40% chance of coronavirus becoming a global pandemic and if that happens, a global recession is a certainty. Individuals and Companies are refraining from planning travel in the summer months. Conferences, hotel stays and air tickets are getting cancelled across the globe and Indians are doing the same. Per the LocalCircles survey on Coronavirus a few weeks back, 41% Indians said they are uncertain about their summer travel and may cancel it. On the business front, 45% small businesses said they expect either a supply disruption or a demand disruption in the next 3 months.

With the Coronavirus impact, one positive for India is the lower oil prices which typically lead to more money in the consumer’s pocket to spend. The big question is, will the consumer spend it or will they save it to be prepared for no or low salary increments and an uncertain job market?

45% households say they plan to reduce discretionary spending in the next 4 months; 41% faced with rising expenses and flat/declining earnings 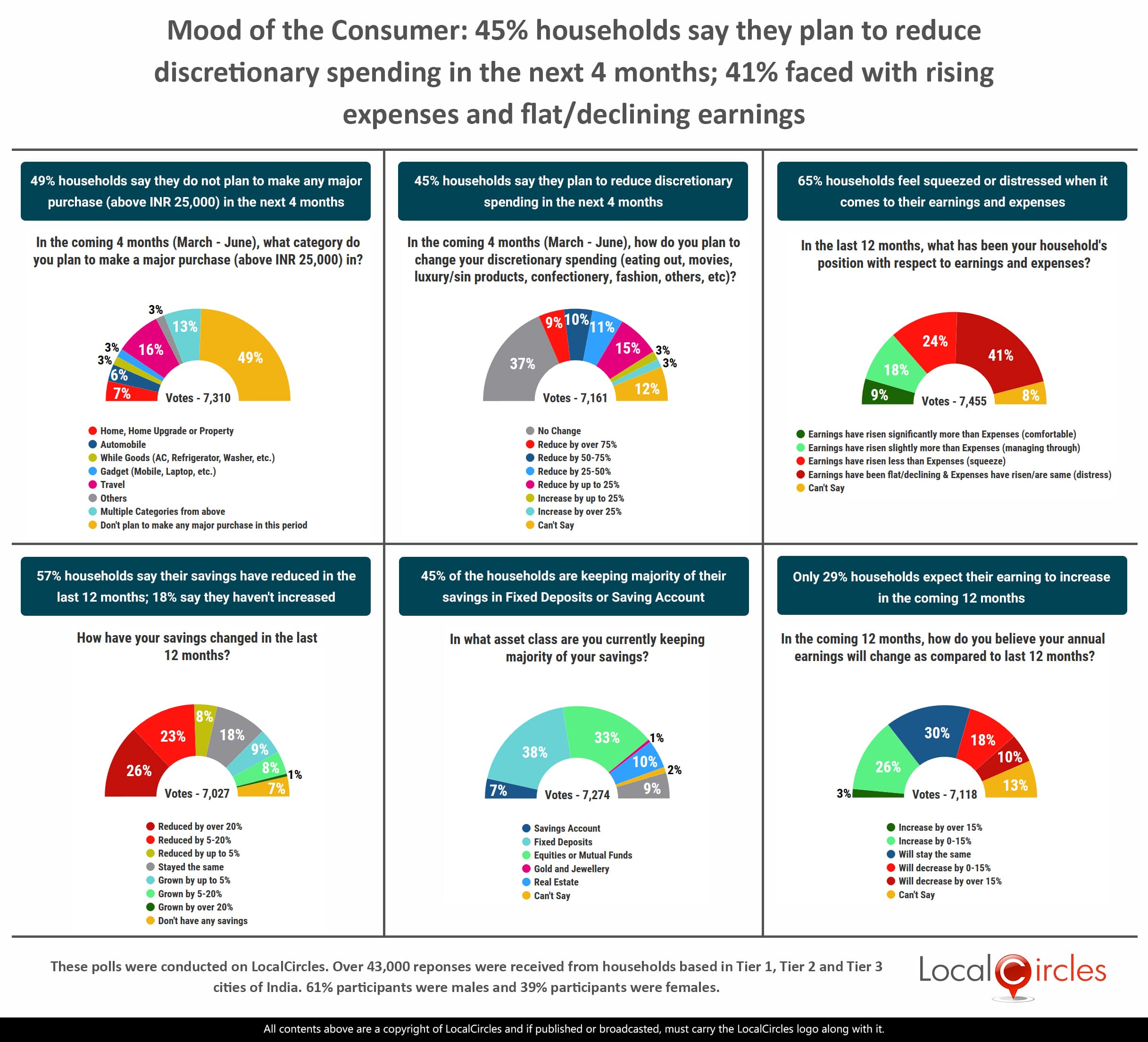