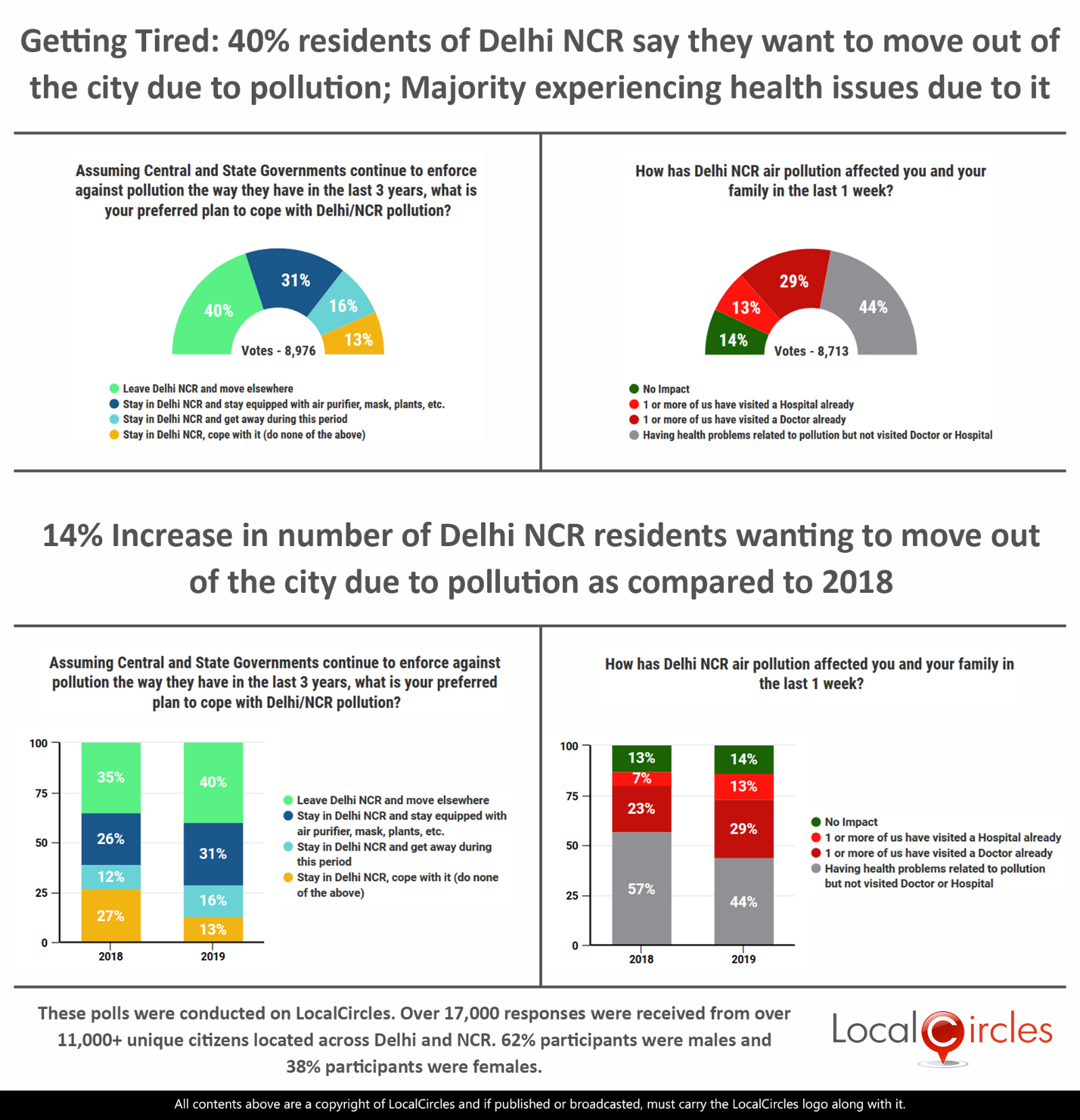 3rd November, 2019, New Delhi: Delhi has turned into a gas chamber as the pollution levels hit the ‘severe+’ category. Schools have been shut, odd-even is being implemented and doctors are reporting a spike in patients with respiratory related issues. For the second year in a row, LocalCircles conducted its Coping with Pollution survey to check what the residents plan to do to cope up with this man-made emergency situation. The survey received more than 17,000 responses from people living in Delhi, Noida, Gurugram, Ghaziabad and Faridabad. 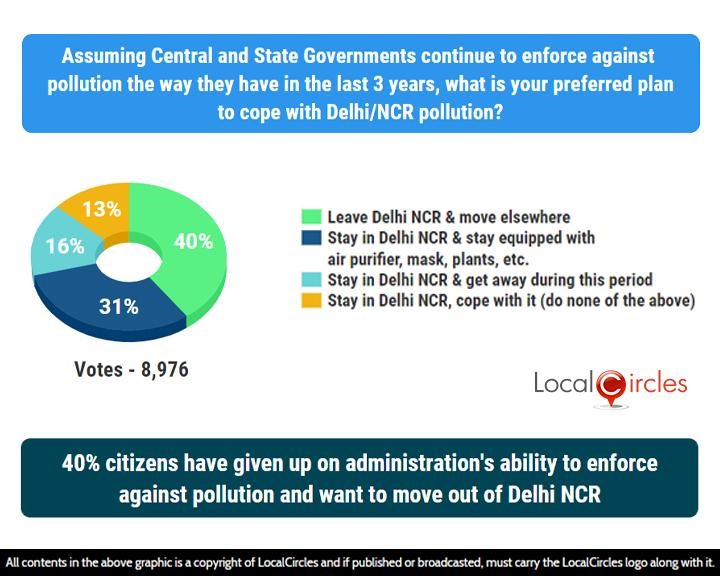 In last year’s survey, 35% residents of Delhi NCR had said that they would like to leave their city to protect themselves and their family members from the ill-effects of the increasing pollution in the Delhi NCR region. The comparison with last year shows that the percentage of Delhi NCR residents wanting to leave the city due to pollution has risen from 35% to 40% in just 1 year. The move for many however is dependent on they and their family members finding a career opportunity elsewhere but the choice seems clear and they want Out.

According to a large number of people who have been very active in the various local circles of Delhi NCR, pollution and air quality, this is a super collective failure of all arms of the Government. People pay their taxes and the least they expect the Government to do is provide breathable air, clean drinking water and pothole free roads. People have expressed how, they or some of their family members have started experiencing severe health conditions with their eyes, lungs, throat including cancers which their doctors are attributing to exposure to pollution over long periods.

Terms like COPD (Chronic Obstructive Pulmonary Disease) or an irreversible type of asthma and MDS (Myelodysplastic Syndrome) a rare form of blood cancer which is caused due to sustained exposure to the carcinogenic benzene are being discussed by citizens. While, many residents of Delhi are completely unaware of the long-term effects of exposure to hazardous air quality, chest experts like Dr. Arvind Kumar are suggesting to run asap if you have a child in Delhi NCR and one can afford moving to another city financially. According to him, cases of stage 4 lung cancer in non-smokers in their twenties have become common. All of these facts are giving people a reason to call it quits and look for career opportunities outside Delhi NCR.

Giving Up: Percentage of Delhi NCR residents wanting to leave the city due to pollution rises from 35% to 40% in 1 year 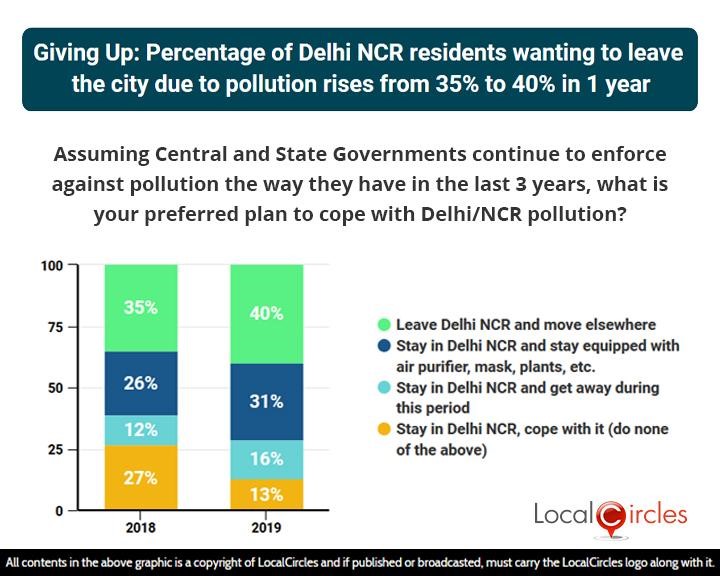 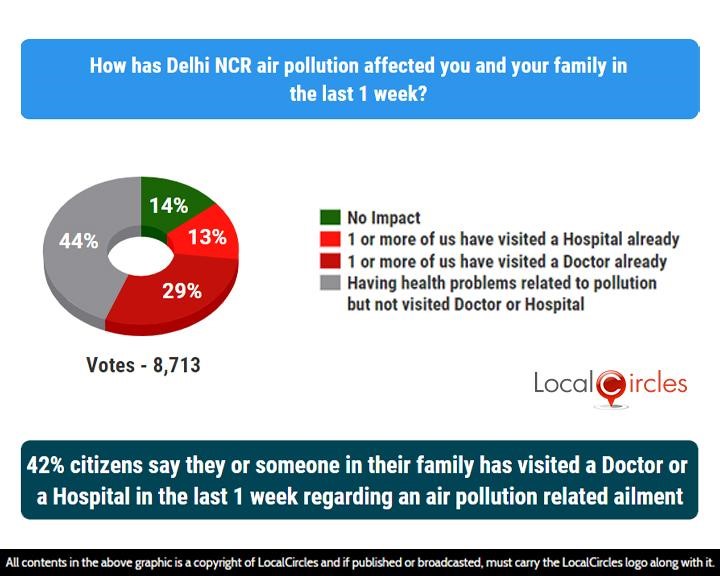 When compared with last year, the percentage of Delhi NCR residents who have already seen a doctor or visited a hospital this season due to pollution has increased from 30% to 43% in the last 1 year.

Declining immunities: Percentage of Delhi NCR residents who have already seen a doctor or visited a hospital this season due to pollution has increased from 30% to 43% in 1 year 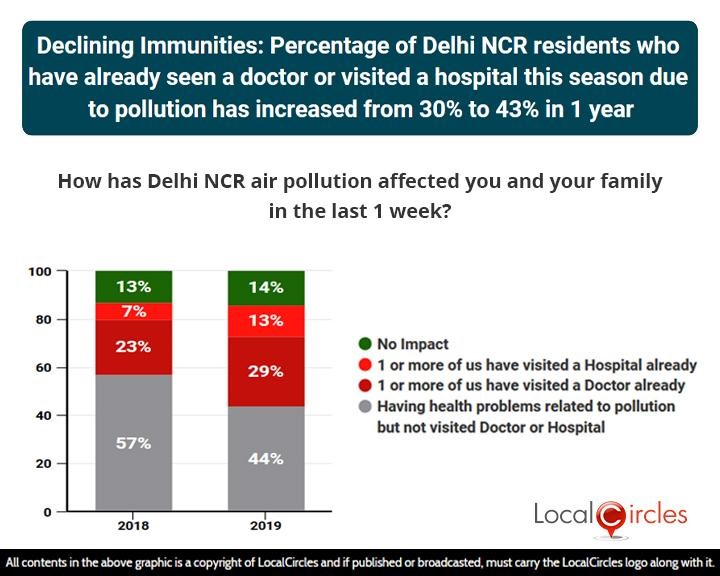 The Environment Pollution (Prevention & Control) Authority has declared a public health emergency across the Neighbouring Capital Region. The situation has become grim with the residents completely unsure of what they should do to protect their loved ones from falling ill due to the thick blanket of smog formed because of this toxic pollution.

In an earlier poll conducted before Diwali, 42% Delhi NCR residents had said it is the stubble burning by farmers of Haryana, UP and Punjab which is the primary reason for bad air quality during the months of October to December. However, there is a high level of frustration in a sizeable number of citizens who now believe there is lack of intent from various arms of the Central and State Governments to address the issue of Delhi pollution. With 4th season of hazardous pollution levels and no concrete actions to address stubble burning in Punjab, Haryana, Uttar Pradesh and Rajasthan, many are ready to exit Delhi NCR then live on false promises or hope.