As India experiences a fast-growing second wave of COVID, only 25% parents willing to send their wards to school in April

March 31, 2021, New Delhi: Three data points released last week are of great concern. First, the Chief Minister of Punjab announced that of the genome testing done by the state, 81% of the COVID-19 samples were found to be of B.1.1.7 i.e., the UK variant of SARS-COV2. The next day, Germany’s Chancellor Angela Merkel announced that the B.1.1.7, which is fast spreading in the country is more transmissible than the original strain and is more dangerous to children and young people, and we need to put the protection of schools more front and centre than with the original virus. The day after she said this, the city of Bengaluru in the month of March reported approximately 500 cases of Covid in children under the age of 10.

It is not hard to decode the developing story here. The kind of Covid surge experienced in many parts of India that have led to 6X growth in daily cases in the last 45 days, indicates that there is a different strain or two from the original one that is propagating in the country. With limited genome testing (being done on less than 5% of the samples), only 700 or so cases of B.1.1.7 have been officially identified.

All of these developments have gotten parents of school children greatly concerned. With previous sessions of the school still continuing in some parts of the country, with the next session due to start in April, many parents have been raising their concerns on the LocalCircles platform. The platform, since April 2020 has been collecting responses from parents to gather collective pulse on school reopening and online classes, and has been escalating the same to the Government. After a clear ‘NO’ to school reopening by the majority of the parents, it was in January 2021, that for the first time, LocalCircles observed a drastic change in the opinion of parents. In early February, 67% of parents were in favour of schools reopening as daily Covid cases in India hit an all-time low of approximately 10,000 cases per day.

Subsequent to LocalCircles raising the collective opinion to the Ministry of Education and Chief Secretaries of all states, physical schools for most classes opened in February 2021. Earlier, schools for senior classes, from 10-12 were operating in some parts of India and in some parts on a consultation basis with written permission of parents.

Taking cognizance of the alarming rise of COVID-19 in several states and districts across the country in the last 45 days, LocalCircles decided to conduct another survey to understand if parents are willing to send their children to school in April, and also to determine a criterion that can be used to open schools. Approximately 250 districts in India now have over 100 active cases, while there are still 500 districts with active cases less than 100 and a handful with zero active cases. The survey received more than 18,000 responses from parents located in 272 districts of India. 44% parents that responded were located in metros or Tier 1 districts, 28% were located in Tier 2 districts and 28% of parents were located in Tier 3, 4, or rural districts.

Given the latest rise in Covid cases, only 25% parents willing to send their children to school in April

The first question in the survey sought to understand parents’ perception to send their children or grandchildren to school in April if the Central or State Government or District administration decide that schools should remain open or re-open. In response, only 25% of parents said “Yes”. The majority of 58% of parents said “No”. There were also 10% of parents who said that “schools for my children or grandchildren are shut in April for summer break”, while 7% couldn’t say. The poll in the survey received 9,687 responses. 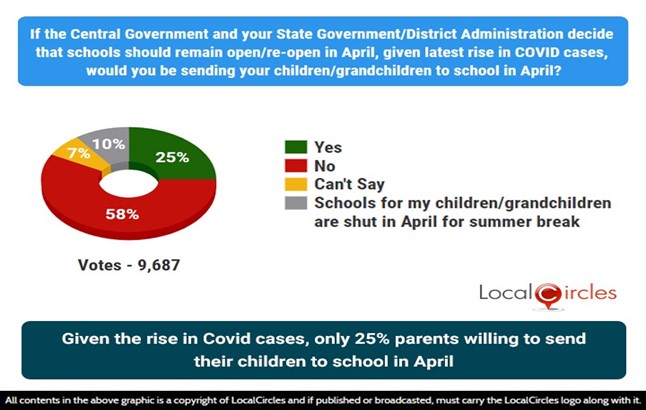 In summary, per feedback received from people and given the massive surge in the Covid cases experienced in the last 3 weeks, the default option for the schools should be closure from April – June. Exceptions may be taken on the basis of active case numbers in a particular district along with the variant type reported, the daily case curve to authorize District Magistrates to permit schools to operate as long as active cases are less than 100. As far as the scheduled Board Exams for Class 10 and 12 in the month of May is concerned, the Central and State Boards will need to make a decision based on the national situation. The feasibility of conducting the board exam both online and offline does deserve consideration.

Finally, because of what has been reported of the B.1.1.7 world over with several European Countries including the UK seeing high transmission amongst children and young, the Punjab data confirming its dominant presence on the ground and the fact that a major city like Bengaluru had 500 cases of children under 10 being infected with the Covid, and the national caseload growing by 6X in 45 days, it does demand a much more conservative approach to school reopening.

LocalCircles has submitted the findings of the survey to all key stakeholders in Central Government and all Chief Secretaries of States so the parents’ collective feedback is given the due consideration when deciding the school reopening approach for April – June 2021.